Please Click Here to Access our Full Archive
Please Click Here to View Our Full Archive Photos - To learn more about an image click on it then the i (info) symbol
Buntingford Bowls Club is a fully integrated Mixed Bowling Club now and has members ranging in age from the very young to the young at heart..... (It would be impolite to reveal a lady's age, but the youngest bowler we've had on the green this season is just 7 years - and one of the gents has just turned 93 years old!)
​
In 1974 a number of improvements were made to the Clubhouse with proper toilets being constructed, together with a facility where the Ladies then had a comfortable changing room to use. The Gents still continued to use the wooden shed 'out back' to change, and you had to always make sure to kick the changing room door before you entered - and then wait 30 seconds. This wasn't to make sure that everyone was decently dressed, but to give enough time for the furry creatures and the local wildlife to disappear.........
Over the next 20 years saw more improvements made to the Clubhouse including the building of a kitchen, an extension to the bar cellar, and also a porta-kabin was bought in and placed in the grounds adjacent to the clubhouse. This was then used as the Gents changing room for a number of years until 1997.

With the improved Clubhouse facilities Buntingford Bowls Club were able to put a dartboard up in the Clubhouse and then they entered a Darts team where they competed against other Pubs and Social Clubs from the local and surrounding areas. Buntingford increased to two Darts teams soon after which meant the clubhouse was regularly used throughout the winter months. Darts bought the club some success with a number of trophies and Championships being fought for.

A few years later a Pool table was bought in and again Buntingford Bowls Club put together a team. They had some successful seasons against Pubs and Social Clubs from the local area.

With Pool and Darts ensuring the Clubhouse was regularly used, our revenue increased and every visiting team enjoyed coming to Buntingford Bowls Club as the prices behind our bar were much more favourable that at their own venues.....

Keeping the Bowls Green to a reasonable standard is always going to be a challenge, especially when the 'green' was laid nearly a hundred years ago. A number of members over the years volunteered to take on the role as 'Greenkeeper' and did their level best to maintain and cut the green. Robo and Les Jackson are just two of those members that devoted a number of years to the club.
In 1982 and 1992 it wasn't possible for the green to be at its very best and this meant that in those seasons they were bought to an early close as the green had to be shut to allow time for the grass to recover ready for the following season.

Nowadays, Buntingford Bowls Club pay contractors to do the Greenkeeper work and this has taken much of the burden off the members. However, there are still a number of members that regularly contribute in cutting and maintaning the green.

Buntingford Bowls Club have been hosting high profile County matches for the last few years and this is a testament to the success of those members that play at the highest level that initially put the Buntingford Bowls Club on the map, and to those players that regularly reach the latter stages of the East Herts and Hertfordshire County competitions.
Of course on from there, thanks go to the hard work of the many that work on the green, the green surroundings, and for the many members that provide the excellent hospitality - which is second to none. All of this adds up to give Buntingford Bowls Club a very high profile within the County of Hertfordshire.

In the mid 1990's upgrades were made to the green with the ditches being rebuilt and the green 'lifted' along each side. This was at a significant cost, however it was money well spent and improved the quality of the playing surface and surrounds.

In 1998, and with help and thanks from donations from some of the Club members at that time, and with the help of a substantial National Lottery grant, Buntingford Bowls Club were able to upgrade their facilities and build a completely new Clubhouse - and what a building we have now. Buntingford Bowls Club can now boast that they have a magnificent Clubhouse facility that ranks alongside some of the best in the Country. Thanks and gratitude go to Jack Platt who oversaw the building project. The new Clubhouse was officially opened by the Bowls England President at that time. 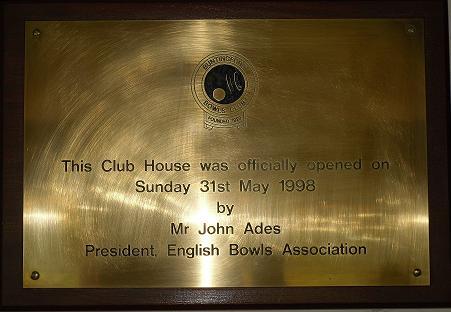 Our Club Badge has a story behind it and the original design featured a shield with a cross on one side, and a picture of a Water Pump on the other side. Seth Ward was a founder of Buntingford back in the 17th Century and the cross represents Seth as he was the Bishop of Salisbury. The Victorian Water Pump erected on Market Hill ouside of the 'Arms Houses' also links to Seth Ward.
In 1972 the badge was redesigned to the way it looks today to celebrate the Club's 50th Jublilee Anniversary. A banner was added showing the date 1922-1972. In our 60th Anniversary year in 1982 the date banner was amended, and it was amended again in 2012 to celebrate our 90th year. In 2022 it is expected to change again with a completely new design to celebrate our Centenary year.
Buntingford Bowls Club moved into the 'technological' age with the creation of a website in 2007. Eddie Plume set up this up to help increase the profile and brand of the club. He handed the reigns over to his son Mark the following year who invests hours and hours of his time regularly updating it. In 2019, after over 10 years of regular updates Mark stepped down from his role as website administrator and passed on the reins to Jake Andrews who continues to update today.