International Success
In 2019 Ross Murphy and Mark Plume took to the International stage to represent Team England in World Invitational Events based in Hong Kong and China. Ross and Mark were selected as part of a 16 strong team from England and was made up of 12 Men and 4 Ladies that took on 22 countries from across the world and what unfolded was quite simply magnificent.
​
In the Hong Kong Semi-Finals Mark and his England 'B' rink were beaten by just 1 shot against a very youthful team from Malaysia, but Ross and his England 'A' rink were outstanding against the hosts Hong Kong and secured their place in the World Invitational Final. His England 'A' team were then superb, winning comfortably to be crowned Hong Kong World Invitational Champions. Mark's England 'B' team took the Bronze medal.

In China, Mark’s rink had comfortably beaten Malaysia in the Quarter Finals, they then sealed a nail biting extra end win in the Semi Finals against Macau to make it through to the World Invitational China Open Final.
​
Ross and his England ‘A’ rink beat the South Africa International team in their Quarter Final match, and then went on to beat Zimbabwe on the last end in their Semi Final to make it a very first ‘All-England’ Final in the Tournaments 23 year history. In a very high quality Final, Mark and his England ‘B’ rink took the Gold Medal with some exceptional bowling and were crowned World Invitational China Open Champions. Ross and his England rink settled for the Runners Up spot and a Silver medal.
Bowls England National Championships
In 2018 a total of 847 entries from across the country took part in the National Club Two Fours competition and unbelievably Buntingford's Men reached the National Final.

Buntingford faced Gerrard’s Cross from Buckinghamshire in the National Final and their opponent’s team was packed with International and county players. The Final started well as Buntingford led early on, however it wasn’t to be as the game progressed and Buntingford Bowls Club finished as the National Club Two Fours Runners Up. There were hugs and tears after the final amongst the players and supporters, and rightly so.

In 2007 Mark Plume, John Powell and Scott Wake reached the Hertfordshire County Triples Final and became the first ever players from Buntingford Bowls Club to qualify for the National Championships at Worthing

The following year in 2008 and qualification for the Bowls England National Championships came once again. This time via the County Fours for Carl Frostick, John Powell, Mark Plume & Scott Wake.

Buntingford Bowls Club then had to wait until 2013 for their next appearance at the National Championships as Carl Frostick competed in the National Mixed Fours competition reaching the last 16 stage before going out against a rink containing two of the top players in the world - Nicky Brett and Ellen Faulkner.

In 2014 Buntingford were back again at the Bowls England National Championships with Bryan Davies, Ken Mulqueen, Peter Agnew & John Powell after the four had reached the County Fours Final.

2015 and the Bunty Boys were back again at the National Championships and this time produced one of the greatest performances ever seen by anyone from Buntingford as Carl Frostick, Scott Wake & Mark Plume reached the National Triples Semi-Finals.

2016 and it was four years in a row for Buntingford in qualifying for the National Championships after Mark Plume and Peter Agnew had won the Hertfordshire County Pairs Title just a month earlier. They were also the reigning EHBA Pairs Champions.

In 2018 Carl Frostick, Scott Wake and Mark Plume were back again competing in the Bowls England National Triples Championships.

2019 and the Buntingford four of Bryan Davies, Vic Greenberg, Dave Murphy & Tony Keeling had won the Hertfordshire Senior Fours Championship and qualified for the National Championships at Leamington Spa and reached the last 16 of the competition.
Still in 2019 and Ross Murphy took to the National Championships at Leamington Spa to play in the Two Wood Singles competition after winning the Hertfordshire County Title.
​
Following his Leamington experience Ross represented Hertfordshire in the Eastern Counties Two Wood Singles competition and reached the final to become the clubs first ever Champion in this competition.
Ladies Success
​Dinah Geere is our history maker after winning the first and only external individual competition for Buntingford Bowls Club after being crowned East Herts District Women’s Bowls Association Millennium Singles Cup Champion in 2016.

​Our Buntingford Ladies made history by reaching their first ever Team Competition Final in 2011 when they were Runners Up in the Anniversary Cup. This is a 'Top Six' competition with a Singles, Pairs and Triples being played. The team that day was: Mary Smith, Jenny Hawes, Dinah Geere, Val Moules, Beat Stone and Rosemary Webber. 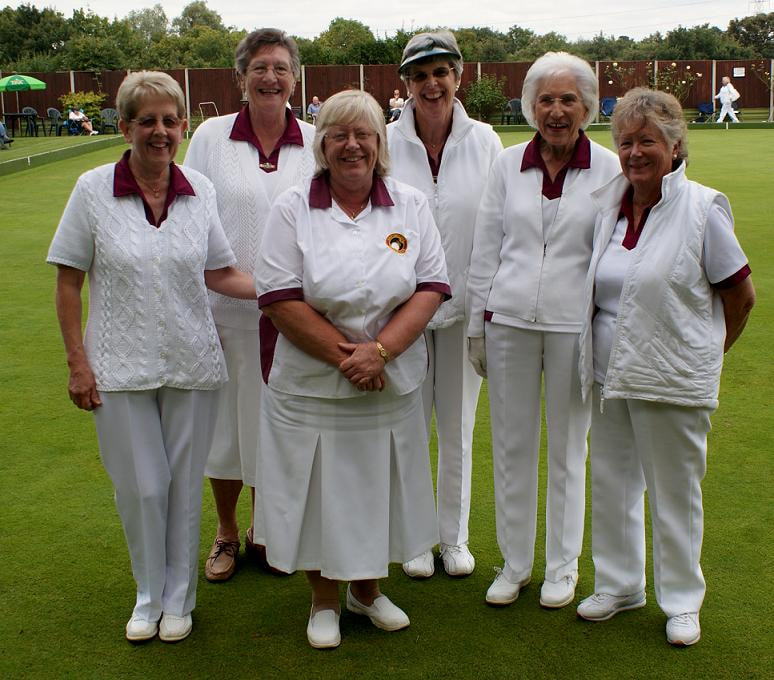